Some Thoughts on Fitness

I have never been an athletic person. Even as a child I avoided physical activity like the plague. Gym class was torture, I hated every sport my parents ever signed me up to play, there are numerous pictures of me looking miserable on rollerblades or a bicycle. If forced I would play tag, but only freeze tag where I would immediately try to get frozen which meant I was now able to just stand quietly while the rest of the game progressed around me. I would have much, much rather been alone with a book or my American Girl dolls. 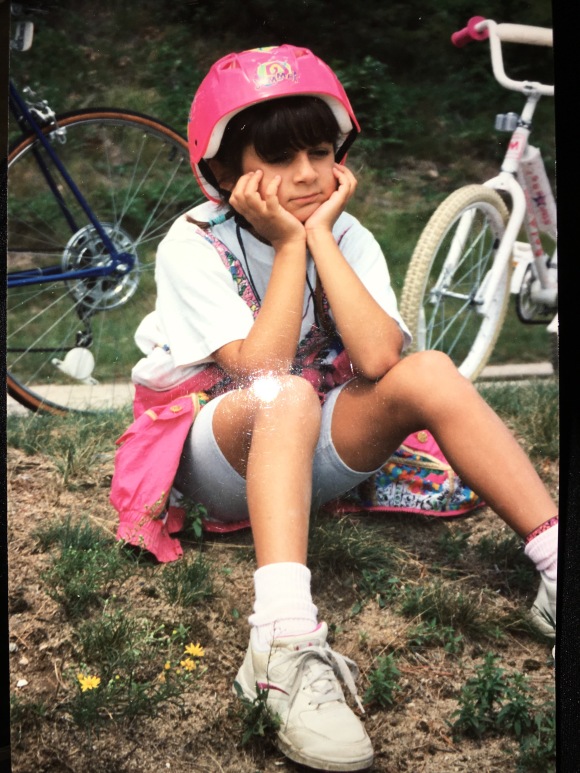 It shouldn’t be a big surprise then that working out is a struggle for me. It’s the biggest mental challenge I have on any given day-forcing myself to work out. When I woke up this morning with an achey knee and an overwhelming desire to just sit quietly in my kitchen and write, I was wracked with guilt.

“Just because your knee hurts doesn’t mean you can’t do an upper body workout,” said the devil on my shoulder.

“You deserve a rest day, stop being so obsessive. You work out for at least an hour 6 days a week! Enough is enough!” said the angel on my other shoulder.

Today, obviously, I listened to the angel, because here I am. But I still feel guilty, and I don’t like that.

This guilt isn’t coming from anyone but myself. If I texted my trainer right now she would probably tell me it’s fine to take a rest day and to just make sure I don’t lose momentum for tomorrow and the next day and to not eat like a monster today. She’s not a drill sergeant, she understands life is a thing that happens and rest is important.

The guilt comes entirely from myself and this obsession I have about being a certain weight for my wedding in 38 days (but who’s counting?).

Am I the skinniest I’ve ever been? No. But I am the strongest I’ve ever been. And my wedding dress fits. And I wouldn’t be ashamed to be on the beach with my smaller-than-they-used-to-be stomach rolls. So why am I still obsessing?

I have no idea. But I do know it has to stop. I can’t keep beating myself up about a weekend spent eating off-plan, or a missed workout. I need to focus on what I’m doing right and not worry so much about being wrong. I think if I didn’t have the wedding as such a concrete goal I may not feel this way, but with just over a month left every missed or half-assed workout feels like a gigantic failure.

I do know that after the wedding I need to re-evaluate what fitness really means to me, and what place it has in my life. I can guarantee post-wedding it will not mean working out 6 days a week and spending astronomical amounts of money on gym memberships. I need to find that happy medium where I still feel proud of the things my body can do, but I’m not crazed about hitting that next goal.

The “fit life” might be having a moment right now, but deep down inside I’m still that kid who would rather be laying down in a hammock with her book, and I have to remember that that’s okay.

Oh hello! Remember me? Wandered off for the past six months or so, but recently I was hit with the urge to revitalize this old blog so here I am.

I miss having a record of everything going on in my life. When I used to blog regularly it used to be so fun to go back and see where I was this time last year. What was I doing? What was I wearing? Who was I back then?

My goal here is to keep up with this space more regularly. I’m not sure what that will mean yet. If I had to guess, I would say this space will be mostly words. I’m not a photographer by any means and I don’t particularly enjoy having my picture taken. I’m hoping this can be a space where I can share stories about my life, my hopes and fears, my wins and losses, things that annoy me and things that make me laugh until I cry. I’m hoping that maybe someone out there will read something I’ve written and say, “Me, too!”

I hope you’ll come back and visit as I figure out what the heck this space is going to become.

I’ll leave you with a Harry Potter quote because obviously:

“Let us step into the night and pursue that flighty temptress, adventure.” – J.K. Rowling, Harry Potter and the Half-Blood Prince